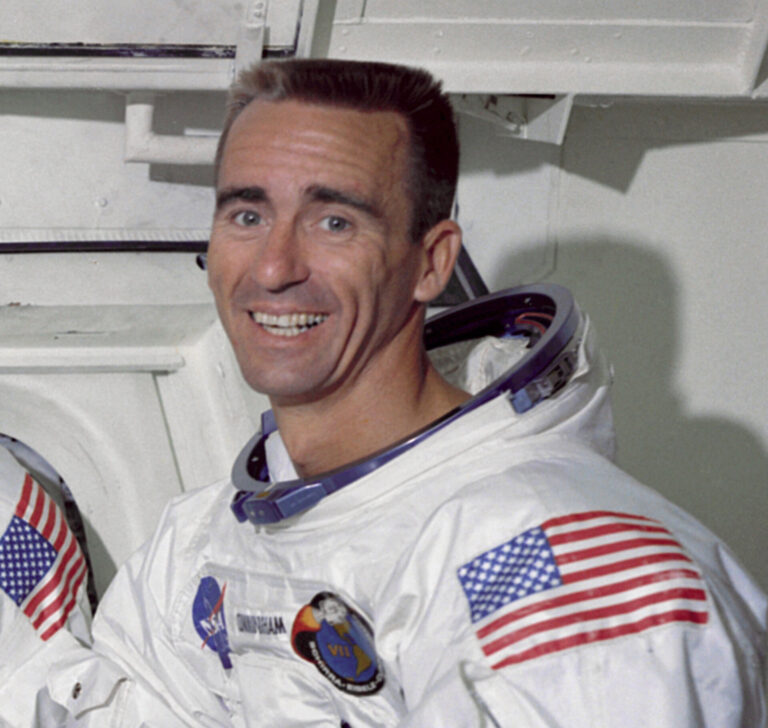 Ronnie W. “Walter” Cunningham was born March 16, 1932, in Creston, Iowa. He graduated from Venice High School in Venice, California and received a Bachelor of Arts degree with honors in Physics in 1960 and a Master of Arts degree in Physics in 1961, both from the University of California at Los Angeles. He later graduated from Harvard Business School’s advanced management studies program. Cunningham served from 1951 to 1976 as a Marine Corps pilot, eventually attaining the rank of colonel in the reserves, and was selected as an astronaut in 1964. He has 4,500 hours pilot time, including 263 hours in space.

Apollo 7 was the first manned flight of the Apollo program, which had been shaken to its core by the deaths of the Apollo 1 crew in a launch pad fire on January 27, 1967. During Apollo 7, the command and service module (CSM) systems were tested in Earth orbit. The mission lasted more than an equivalent amount of time for a spacecraft to reach the Moon and back as the crew spent almost eleven days in space. Live televised images from the Apollo capsule relayed back to Earth captured the imagination of a worldwide audience. The Apollo capsule was larger than the previous Mercury and Gemini capsules, enabling the crew to leave their seats and freely move about the cabin.

Wally Schirra was Mission Commander, Walter Cunningham the Lunar Module pilot, and Donn Eisele was the Command Module pilot on the 263-hour flight. Cunningham participated in and executed maneuvers in transposition and docking and lunar orbit rendezvous with the S-IVB stage of their Saturn IB launch vehicle. The crew completed eight successful tests, including ignitions of the service module propulsion engine, measuring the accuracy of performance of all spacecraft systems. The four-and-a-half million-mile shakedown flight concluded on October 22, 1968, with a splashdown in the Atlantic less than a third of a mile from the originally predicted aiming point.

During his eight years with NASA, Cunningham also made contributions in the area of system development, design and testing for the Apollo spacecraft. His last assignment at the Johnson Space Center was Chief of the Skylab Branch of the Flight Crew Directorate. In this capacity he was responsible for the operational inputs for five major pieces of manned space hardware, two different launch vehicles and 56 major on-board experiments that comprised the Skylab program. The Skylab program also utilized the first manned systems employing arrays for electrical power, molecular sieves for environmental control systems and inertia storage devices for attitude control systems. He retired from NASA in 1971 to enter private business.

Walter Cunningham was awarded the NASA Exceptional Service Medal and Navy Astronaut Wings and is a co-recipient of the AIAA 1969 Haley Astronautics Award. He was presented the UCLA Alumni Professional Achievement Award for 1969 and the National Academy of Television Arts and Sciences Special Trustee Award (1969) as well as the American Legion Medal of Valor, and in 1975, the Outstanding American Award of the American Conservative Union. Cunningham was inducted into the International Space Hall of Fame in 1983.